This photo shows the Pipes and Drums of the 2nd (Scottish) Company of the Hong Kong Volunteer Defence Corps on parade in the 1930s in Hong Kong. In this photo, we can see that the company adopted the uniform of the Gordon Highlanders. This was reportedly because ‘their first commanding officer was a former officer in the Argyll & Sutherland Highlanders who was surnamed Gordon’ 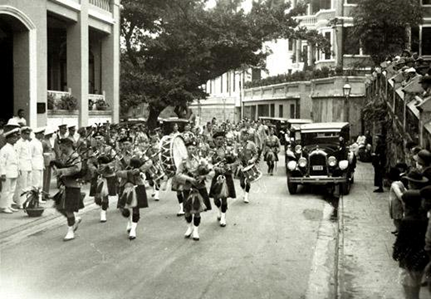 The arrival of the bagpipe in Hong Kong 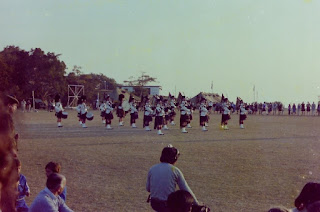 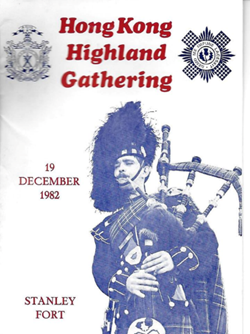 The second Highland gathering was held on 19th December 1982 at Stanley Fort, with the assistance of the 1st Battalion Scots Guards. Chieftain Roy Henry, also the Commissioner of Police, said that without their help, the ‘day would not have been possible’ (Hong Kong St Andrew’s Society, 1982). The gathering was well-attended. According to the society’s meeting minute dated 12th December 1982, 1100 tickets had been sold in advance by the society, and 300 tickets would be available for sale at the gate. Program of the second Hong Kong Highland Gathering The piping event in 1982 was judged by Pipe Major WO1 Angus MacDonald, whose flight ticket was sponsored by British Caledonian Airways. Angus MacDonald was judging along with Donnie Finlayson, who was asked by the society to judge so as to make the Scots Guards-dominated competition look fair: I was the judge for the piping, along with pipe major Angus MacDonald who no longer lives […] So, Pipe Major Angus was brought out specially to j